So, why did you choose to marry Kunle Poly amongst all men considering the fact that you are a very pretty woman?

That’s an ongoing question that I don’t think for ever and ever I’m going to stop answering that question, I have said it in a lot of interview and I’m going to repeat it again Kunle Poly is a person I’m going to give a title that “don’t judge a book by its cover” before I met him, I have never heard of Kunle Poly we just hooked up, we started as friends.

We were friends for a couple of years and you know I had a lot of people coming to tell me a lot of things about him that he is this, what are you doing there, don’t even let people know that you are dating. Moving close to him I realized he is not the kind of person people portrayed him to be.

A lot of people come to me and be like your husband is this and I’m like call his number know the kind of person he is, come back and tell me who he is.

Kunle is a very playful person, I’m playful too but his playfulness is beyond me, he has a good personality, his level of respect is high and he is a role model. I have learnt a lot from him.

Like you mentioned earlier about people saying a lot of things about him which is mostly negative, so since you met or married him have you ever had any negative encounter or have you ever been endangered staying with him?

Never, I’m saying it before God and man and I’m saying it with the six feet I’m going to sleep in when death comes, I have never encountered that with this guy, he is just as sweet as chocolate.

We are not perfect, there are ups and downs , the normal argument that happens between couples is the same with us which is normal, you know women don’t agree sometimes and have a little psycho so other than that I have never encountered any endangerment with him, I have not even seen him with a gun and for years he doesn’t know I tried to trail him and see if I will see something like that at least just a little traces but I haven’t seen any, there is no sort of endangerment at all. 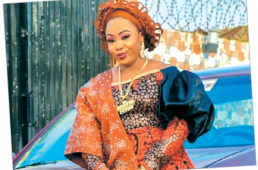 Most people think that NURTW workers are unruly, uncultured, and brutal. Do you share the same opinion; he is your husband, what is your ideology with his kind of work?

I think the present union are way different from the past, I said it in one of my video back in the days nobody wanted to associate  with them talk-less of marrying them or even going closer to them but in this era we are they are well oriented, they are all responsible fathers, they know the do’s and dont’s of this job, they have brought social life, they’ve brought patience at least I have been in a couple of their meetings you know educating their members on how to be calm with people.

I also watched one of MC Musiliu’s interview saying that there is not going to be any form of violence which people know them for, that there won’t be anything of such in this era like they have a way of testing a driver to know if he had taken alcohol, you know a driver shouldn’t be driving under the influence of alcohol.

So I think their era is different from how it used to be, they have created room for improvement.

Tell us about your upcoming project

I have a new movie coming out actually it’s in the making right now, I have to take break because of his birthday, it’s an English movie, is called CHANGE GAME.

It’s about marital affairs especially what is going on in the community now that husbands are killing their wives just because of stupid argument, how to control our anger and how to control ourselves generally, That’s what the movie is all about.

So you do basically English movies?

No, I do both English and Yoruba movies

So how do you manage being a wife and actress all in one?

It’s just God because sometimes I look at myself and i’m like how do I do it. I live in US but I come home regularly, being a mother of four, managing him too, travelling which I also work there too, acting at the same time, it’s just God.

I mean, people say media is not good but to me media has helped me in a lot of ways that I can’t even phantom. I have a lot of people that have moved closer to me and they have being awesome and phenomenal.

I mean a lot people that don’t want to move closer to you, if they have the same opportunity that you have they will be zealed but because of low self-esteem they can’t unleash their selves.

Like I have got some friends telling me that what am I doing with those kind of people you know pretending to be saints but you will be surprised to find out that they are also sleeping with these people, they might do it because of the money but for me I think what you know you won’t do forever, what’s the essence of doing it all. 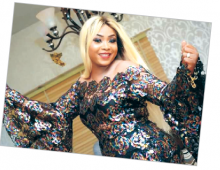 Did you marry him because money?

No! you know love has no description, my love can go to someone hawking on the street.

I named our son Oluwajomiloju because sometimes I just wonder that how did I fall in love with this man you know, sometimes when we have an argument and I ask myself what did I see in this guy like what is wrong with me.

I love Kunle because he is dark, because he is playful; Kunle is just full package for me. He is a very generous man, he goes out of his way to please people and he sometimes gets betrayed by these people.

Tell us about your educational background

I went to primary school, I went to secondary school in Jos and after then I went into nursing when I was still in Nigeria,I was doing nursing for sometime and after I traveled I went into any tech and also criminal justice then later on I found out that I was pregnant so I couldn’t finish that, then I went into transportation where I drive a truck by myself.

50 years after, OBA OLUTOYE, participant in Nigerian Civil War tells the world that NZEOGWU coup was meant to install AWOLOWO

Female singers should do more than shake bum – Onyenka